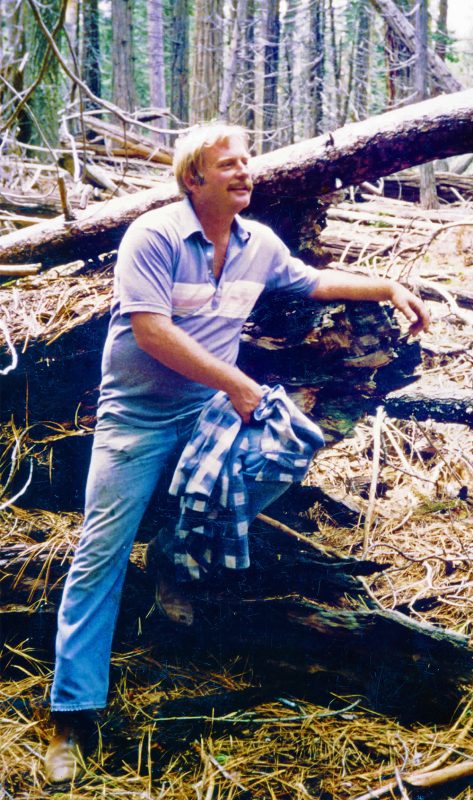 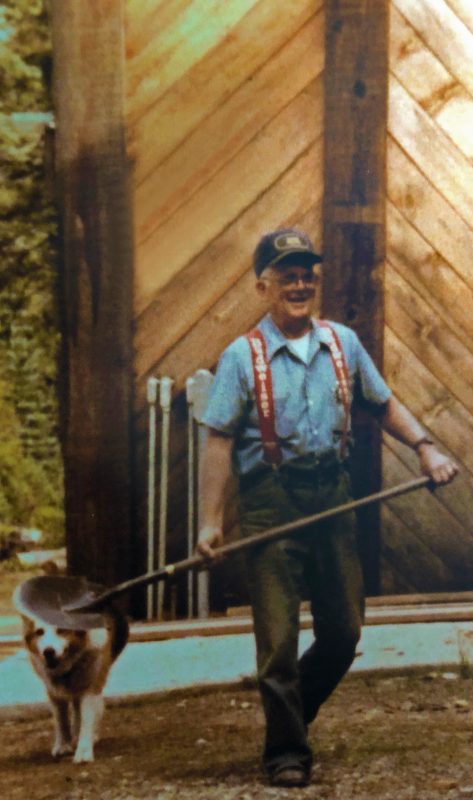 In Memory of Les Clementsen 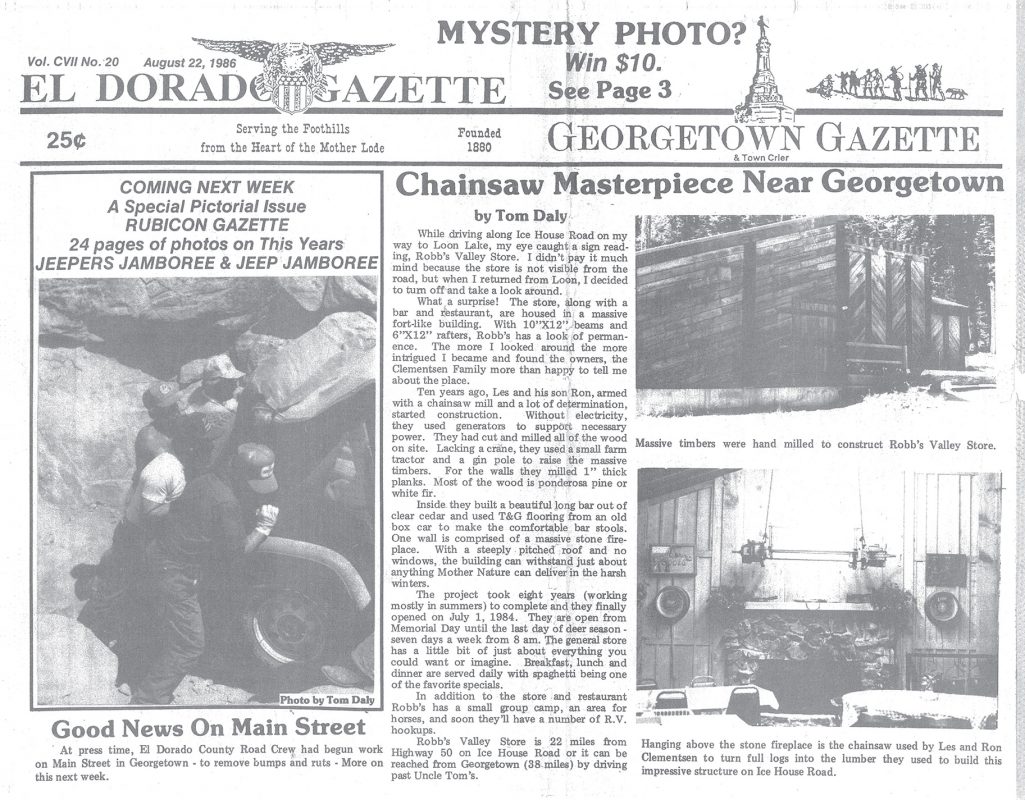 While driving along Ice House Road on my way to Loon Lake, my eye caught a sign reading, Robb’s Valley Store. I didn’t pay it much mind because the store is not visible from the road, but when I returned from Loon, I decided to turn off and take a look around.

What a surprise! The store, along with a bar and restaurant, are housed in a massive fort-like building. With 10″x12″ beams and 6″x12″ rafters, Robb’s has the look of permanence. The more I looked around the more intrigued I became and found the owners, the Clementsen Family more than happy to tell me about the place.

Ten years ago, Les and his son Ron, armed with a chainsaw mill and a lot of determination, started construction. Without electricity, they used generators to support necessary power. They had cut and milled all of the wood on site. Lacking a crane, they used a small farm tractor and a gin pole to raise the massive timbers. For the walls they milled 1″ thick planks. Most of the wood ponderosa pine or white fir.

Inside they built a beautiful long bar out of clear cedar and used T&G flooring from an old box car to make the comfortable bar stools. One wall is comprised of a massive stone fireplace. With a steeply pitched roof and no windows, the building can withstand just about anything Mother Nature can deliver in the harsh winters.

The project took eight years (working mostly in summers) to complete and they finally opened on July 1, 1984. They are open from Memorial Day until the last day of deer season—seven days a week from 8 AM. The general store has a little bit of just about everything you could want or imagine. Breakfast, lunch, and dinner are served daily with spaghetti being one of the favorite specials.

In addition to the store and restaurant Robb’s has a small group camp, an area for horses, and soon they’ll have a number of RV hookups.

Robb’s Valley Store is 22 miles from Highway 50 on Ice House Road, or it can be reached from Georgetown (38 miles) by driving past Uncle Tom’s. 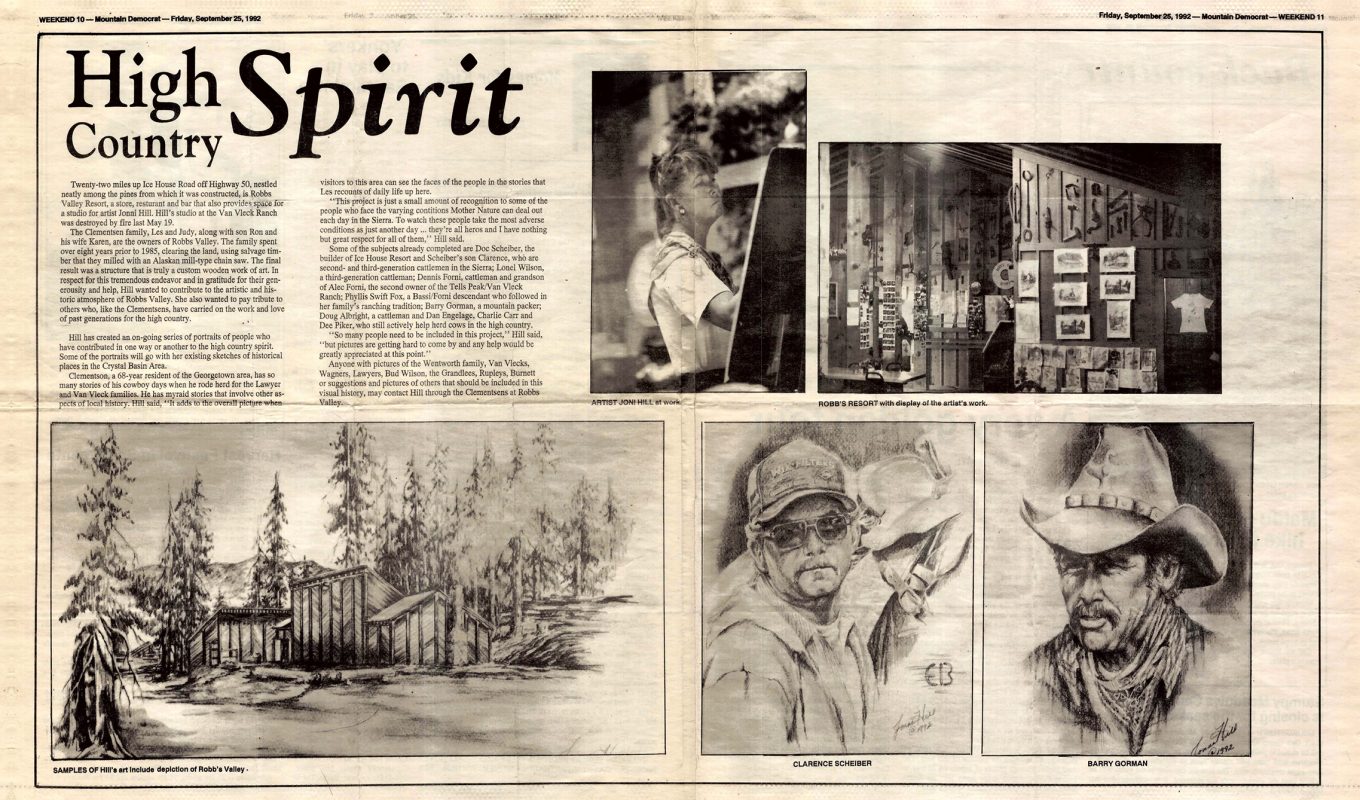 Twenty-two miles up Ice House Road off Highway 50, nestled neatly among the pines from which it was constructed, is Robbs Valley Resort, a store, restaurant, and bar that also provides space for a studio for artist Jonni Hill. Hill’s studio at the Van Vleck Ranch was destroyed by fire last May 19.

The Clementsen Family, Les and Judy, along with son Ron and his wife Karen, are the owners of Robbs Valley. The family spent over eight years prior to 1985, clearing the land, using salvage timber that they milled with an Alaskan mill-type chain saw. The final result was a structure that is truly a custom wooden work of art. In respect for this tremendous endeavor and in gratitude for their generosity and help, Hill wanted to contribute to the artistic and historical atmosphere of Robbs Valley. She also wanted to pay tribute to others who, like the Clementsens, have carried on the work and love of past generations for the high country.

Hill has created an ongoing series of portraits of people who have contributed in one way or another to the high country spirit. Some of the portraits will go with her existing sketches of historical places in the Crystal Basin Area. Clemensten, a 68-year resident of the Georgetown area, has so many stories of his cowboy days when he rode herd for the Lawyer and Van Vleck families. He has myriad stores that involve other aspects of local history. Hill said, “It adds to the overall picture when visitors to this area can see the faces of the people in the stories that Les recounts of daily life up here.

“This project is just a small recognition to some of the people who face the varying conditions Mother Nature can deal out each day in the Sierra. To watch these people take the most adverse conditions as just another day … they’re all heroes and I have nothing but great respect for all of them,” Hill said. 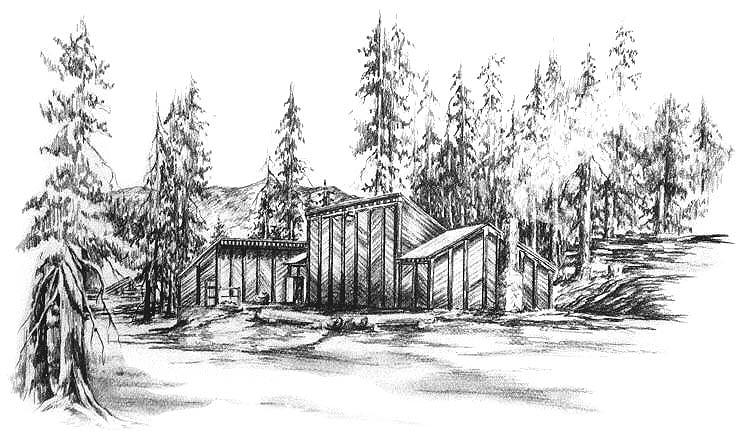 Original Drawing of the Resort Lodge by Jonni Hill

Some of the subjects already completed are Doc Scheiber, the builder of Ice House Resort and Scheiber’s son Clarence, who are second- and third-generation cattlemen in the Sierra; Dennis Forni, cattleman and grandson of Alec Forni, the second owner of the Tells Peak/Van Vleck Ranch; Phyllis Swift Fox, a Bassi/Forni descendant who followed in her family’s ranching tradition; Barry Gorman, a mountain packer; Doug Albright, a cattleman; and Dan Engelage, Charlie Carr, and Dee Piker, who still actively help herd cows in the high country.

“So many people need to be included in this project,” Hill said, “But pictures are getting hard to come by and any help would be greatly appreciated at this point.”

Anyone with pictures of the Wentworth family, Van Vlecks, Wagners, Lawyers, Bud Wilson, the Grandlees, Rupleys, Burnett, or suggestions and pictures of others that should be included in this visual history, may contact Hill through the Clementsens at Robbs Valley.